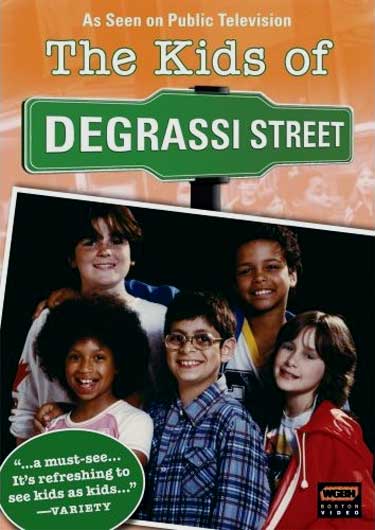 The Kids of Degrassi Street is a drama that aired from 1979 to 1986, and is about the lives of a group of Elementary School children living on Degrassi Street in Toronto, Canada. It is the first in the popular Degrassi series.
It grew out of four short films which originally aired as after-school specials on the CBC in 1979, 1980, 1981 and 1982. The show was acclaimed for its realistic depiction of every day children’s lives and tribulations.

The Kids of Degrassi Street featured many of the same actors who would later appear on Degrassi Junior High and Degrassi High, including Stacie Mistysyn (Caitlin), Neil Hope (Wheels), Anais Granofsky (Lucy), and others. However, their character names and families were all different.

Even though this is children’s show, it is still very enjoyable for teens and adults, although it does not have the controversial "adult situations" of the Degrassi series that came later, you can definitely see the genesis of Degrassi, so it’s a must for Degrassi fans.