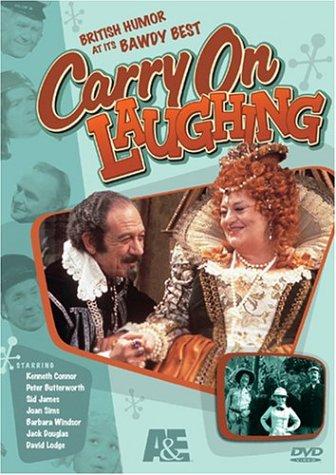 And now for something completely bawdy. Carry on are two words to gladden the hearts of British comedy fans. Thirty-one Carry On films were produced between 1958-1992, and in 1975, Carry On Laughing brought the Carry On mojo to television, albeit for a scant 13 episodes. Each is a randy historical romp or farcical parody. You don’t have to be familiar with the films to enjoy this series’ extremely guilty pleasures. There are ribald double entendres, shameless mugging, awful puns, and even worse jokes. In one "monarchic moment," one loyal subject tells his Queen, "I will serve you humbly." She responds, "Good, I haven’t had humbly in ages." Jokes like that are enough to really make you rue Britannia, but Kenneth Connor, Sid James, Joan Sims, Barbara Windsor, Jack Douglas, Peter Butterworth, and David Lodge make it all sound like Shakespeare. The episodes takes potshots at Upstairs, Downstairs, the Lord Peter Wimsey mysteries, and other historical and mythical figures. The episode "Under the Round Table" will not make anyone forget Monty Python and the Holy Grail, which came out the same year (oddly enough, both make hay with the horse/coconut thing). Carry On Laughing is more akin to Benny Hill than Beyond the Fringe, but for fans of the films, it is a dandy footnote to the Carry On canon.

Comments are closed.
Dawn Of The Croods COMPLETE S 1-2-3-4 - The Moth COMPLETE mini-series