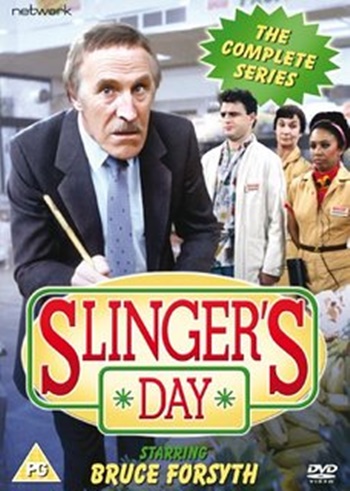 Slinger’s Day is a British sitcom that aired for two seasons from 1986 to 1987, made by Thames Television for the ITV network. It was a continuation of Tripper’s Day, which had originally come to a natural end after Leonard Rossiter’s death, and, despite the overwhelmingly negative response it had drawn from reviewers and a section of the viewing public, was revived this time with Bruce Forsyth as a different character to Rossiter but fulfilling the same role, that of the manager of a London supermarket with largely incompetent staff. Like Tripper’s Day, it was created by Brian Cooke, however, in contrast to the previous series, Cooke only wrote two episodes of the twelve episodes, more than half of them being written by Vince Powell with others being written by Alex Shearer and Sorry! creators Ian Davidson and Peter Vincent, and one episode written by the prolific Andrew Marshall and David Renwick. Slinger’s Day represented Forsyth’s only ever situation comedy acting role, and he …