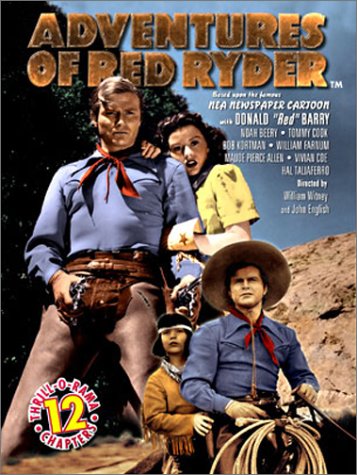 Mesquite banker Calvin Drake plans to profit from the Santa Fe Railroad’s acquisition of right-of-way by gaining control of the land in the territory. In the ensuing war of intimidation against the ranchers, Ira Withers is killed and Red Ryder and his father, Colonel Tom Ryder, form an organization to drive the gunmen and outlaws out of the territory. Colonel Ryder is killed by One-Eye Chapin and Red vows vengeance. Sheriff Dade is in league with the Drake faction, including Ace Hanlon. The Duchess, Red’s aunt, is about to lose her ranch. Red learns of a plan to dynamite a dam providing the water supply, and saves Beth Andrews, daughter of the former sheriff, Luke Andrews who was also murdered by Drake’s men.