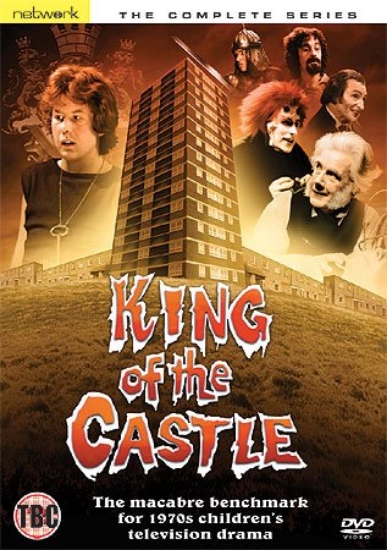 Macabre, fantastical and a benchmark production for children’s television in the 1970s, King of the Castle was created by Doctor Who stalwarts Bob Baker and Dave Martin as one of the run of outstanding children’s dramas HTV produced in that decade. Featuring strong direction and a script which expertly melds fantasy and reality, the series boasts solid performances from genre stalwarts Fulton Mackay, Milton Johns and Talfryn Thomas as well as Philip Da Costa as the series’ hero, Roland.
Recently moved to a crumbling tower block of flats, Roland’s cleverness marks him out for rough treatment from the gang who haunt the stairwells. Fleeing from Ripper, the gangleader, he plummets to earth in a lift that should be broken… waking up he finds himself in the grotesque and eerie fantasy world of ‘The Castle’ – a twisted version of the tower block, filled with gruesome versions of the people he knows. Can Roland find the missing keys he needs to become ‘King of the Castle’?